The first hearing for the new 2015-2022 Housing Element is happening THIS MONDAY with the County Planning Commission at the Civic Center.  We need Strawberry residents to show up and represent Strawberry – if you’re comfortable speaking publicly, please take your 2 minutes in front of the Planning Commission and raise one or more of the key concerns below. If you’re not comfortable speaking publicly, your attendance alone will help send the message that we’re concerned and watching.

Why does Strawberry care?
Despite the reduction in Regional Housing needs in unincorporated Marin from almost 800 units to under 185 units, the allocation at the Golden Gate Seminary site remains at 40 units, virtually unchanged from the last Housing Element assessment except to designate them all as Low Income.

* Despite the reduced numbers from the last Housing Element, the Seminary property continues to have unreduced low income housing totals planned for it, indicating an uneven allocation relative to the rest of the county.  In fact, two of the highest allocations include Marinwood Plaza (where residents have protested the planned development) and Strawberry (where residents have protested the PDA designation), two locations that have created difficulty for the Planning Department and County

* Last time the Seminary property was included because the County portrayed that the application to develop was still active, despite rejection by the Board of Supervisors and the almost immediate formal withdrawal of the application by the Seminary.  This time there is even less rationale:
– there is no active application
– the buyers have publicly indicated within the last 2 weeks that there is no plan or proposal on the table
– the Strawberry Community Plan and Seminary Master Plan are not consistent with development of any additional housing other than for students and faculty; given the Seminary’s sale of the property, how can it be likely that they will develop additional student and faculty housing?
– there is, in fact, no real reason at this time to believe the Seminary to be more likely to be developed in the near future than anywhere else

* The Seminary property scored highest in the county in criteria for development based on equally weighted concepts such as:
– local jobs (?)
– likelihood to develop (see above)
– economies of scale and zoning (is this code for high density?)
– lack of wetlands nearby (Strawberry is surrounded by wetlands)
– no health risks (despite proximity to freeway)

* This proposal includes TWICE the number of required units; during the last Housing Element it was argued that more were needed in order to be sure there are enough in the event a location is eliminated from the list; we reject having units allocated and approved on that basis.  The county has time to verify locations that work and allocate them correctly.  In fact, if they are proposing these locations because they have already been approved, why not allocate 22 units at each of the 3 locations, or 10-15 units each at other previously approved locations?

* The county has previously included 20 “Second Units” per year in their calculations; 8 years at 20 units would almost fulfill our requirements by itself, and would be in keeping with the general flavor of Marin.  This cycle, the calculation includes only 5 Second Units per year.  A September 7, 2012 letter from HCD approving the final draft of the previous Housing Element explicitly indicates that the allowance for 20 Second Units per year was appropriate.   How has that been reduced by 75% in these last 2 years?

* Are the 200 units of affordable housing for agriculture workers included in the previous Housing Element already completed?  If not, why are they not included in the list?  This is a key initiative of the Marin Workforce Housing Trust – how can this not be more likely to be built out than other locations in the county?

* Goal 2 of the Housing element is to Meet Housing Needs Through a Variety of Housing Choices – Respond to the broad range of housing needs in Marin County by supporting a mix of housing types, densities, prices, and designs. How are these Lower Income Units at density in three locations a variety of housing densities and choices?

* A more disingenuous representation of their public outreach process is hard to imagine. The feedback was generally that the assumptions were flawed, that the “choose from our pre-approved menu” process was not worthy of engagement (or of the County), and that with such a reduced target the County should be further exploring (not diminishing) individual unit and second unit opportunities to meet the allocation.

* The “Housing Element” is the housing component of the Countywide Plan, which is intended to ensure to the state that the County has identified adequate locations with potential for growth at both market-rate and low-income levels.

* While designation in the “Housing Element” itself does not change zoning or ensure properties are developed, it is both an encouragement from the County that an area has met certain criteria for development, and a doorway to potential streamlining of CEQA and other evaluation steps before development (See SB375).

* Every 8 years ABAG (Association of Bay Area Governments), which is comprised of representatives from Marin and other Bay Area municipalities, meet to allocate housing needs for the next 8 years in a Regional Housing Needs Assessment (RHNA), based on growth projections

* The assessment for all of unincorporated Marin from 2007-2014 was over 750 units (which included 45 units in the Seminary property); the new assessment (which supersedes the previous one) for 2015-2022 is for 185 units across all income levels:

* The current proposal for the new Housing Element includes these locations and units: 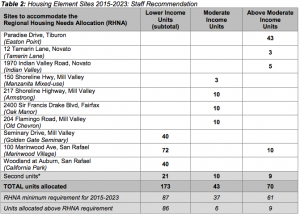 To read the full report, go to http://www.marincounty.org/depts/cd/divisions/planning/housing/~/media/Files/Departments/CD/Planning/Housing/Housing%20Element/20140728_StaffReport_Att.pdf